Shoot went well today. We met up with a few people at the United Steel Workers HQ a little after noon today. Two of them were union reps and the third was an adjunct from one of the local universities here in Pittsburgh. It was a very interesting interview as far as how this 'odd couple' like partnership emerged between the steel workers and educators. My impression of the USWs stance on the matter is a zero tolerance policy and that it's complete bullshit.

DISCLAIMER: These are simply my observations and not necessarily USWs stance.

After we wrapped with the USW people we interviewed 2 former students that are with the occupy Pittsburgh movement. One was seriously in debt and had no degree to show for it. The other had contemplated an advanced degree but realized it wasn't feasible giving his current financial situation and lifestyle.

After we wrapped another Occupier joined in the conversation. The guy, whose name escapes me right now, is a world traveler and has this amazing knack for recalling historical events. His specialty is dealing with the Lewis and Clark expedition (mainly it's origins). He's currently trying to turn Bruno (sp?) Island into a recreational park/ historical site. We talked for nearly 3 hours about the local history of Pittsburgh as well as climbing Fuji and Machu Pichu.

Nearly midnight here and I'm now rendering out over 27 gigs of footage that I shot today. We are staying on in Pittsburgh until late afternoon in the hopes of getting two more interviews and then it's off to Toledo. 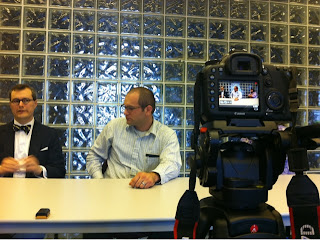