Footage from the Left Forum

My friend Scott was kind enough to shoot some footage during the panel this past weekend using a little 'flip cam' like apparatus I had tossed into my bag last minute.  The clip below is about 14 minutes long and contains the other speakers (Brianne, Nathan and Monica) talking about their respective causes.


The audio quality sucks pretty hardcore due to the air conditioning but you can get the general idea.

It’s good to be a panelist

This year’s panel went much better than last.  I should have known it was going to be a good day between the impeccable weather early on and the fact that we didn’t have to wait in the line wrapped around the Pace building for our tickets.  Panelists got fast tracked to the front of the line.  We had our tickets in hand within five minutes and had plenty of time to grab breakfast before we went on at noon. 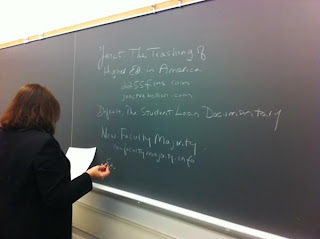 Just prior to our time slot we briefly met with the other panelists Brianne, Nathan and Monica.  All of them were super cool and spoke on a number of things regarding the debt students encumbered to receive a higher education and alternate forms of education (Their links listed at the bottom of this blog).  While they spoke I did my best to live tweet the event though I probably came off as some jerk off on their cell phone.
“That asshole is still on her phone. She hasn’t put it down in twenty minutes!” 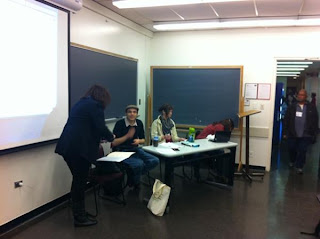 I swear for those of you that were there at the panel I was paying attention. I had hoped that the Left Forum would have picked up on one of several hashtags I planted to RT them but it appears that it didn’t work. (Boo-Hiss).  So much for me being clever. 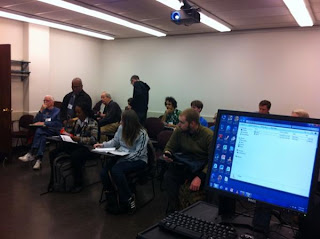 We screened only raw excepts of ‘Junct for the audience.  Most of it was footage we had shown down in DC back in December but we also added a clip from the Temple U. walk out that took place last summer.  Overall the screening was well received.  I had one complaint afterwards about the audio but it was something I had picked up on as well during the screening and can adjust in post.  Still, it was nice to get that feedback as reinforcement. 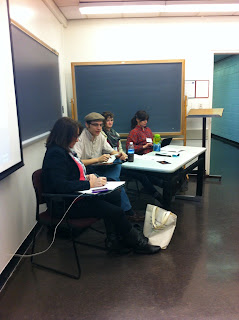 I was a little concerned during the panel when I looked out at the audience and wondered if maybe they had checked out completely.  A few of them looked like they were taking notes, but they could have easily been drawing stick figures.  To my surprise during the Q&A session people started hammering the other panelists with questions and their thoughts on the subject.  People had detailed notes and were writing down websites almost as fast as the people suggesting them.  What I found the most fascinating about this particular forum was the fact that there were only 3 people who were contingent faculty.  The rest were either students or people genuinely interested in the subject.  I have to assume that the message we are trying to present in ‘Junct is slowly creeping out.  This is no longer a subject that only Adjuncts are aware of.  The next step is to make this public knowledge.  Hopefully ‘Junct can acheive that once we unleash it, like a Kraken. 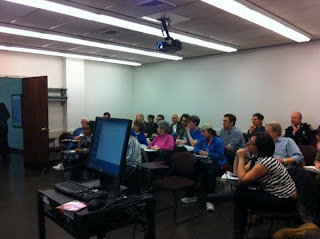 The only thing I regret about the panel is we didn’t get a chance to really talk about the next step with ‘Junct; the potential US tour.  I’m not overly concerned because we do not have any of the specifics hammered out but it would have been nice.

The positive thing that came out of panel was meeting with one of the reporters at The Chronicle for Higher Education.  They are interested in interviewing DLS and I about the documentary.  The reporter is supposed to contact us in a week or so with questions.  They want the real low down on the film so it should be interesting to see what they print out of my quotes.

“You do realize you dropped the F bomb 26 times in the span of three minutes?”
The randomly cool thing was the minor celebrity we had in the audience.  Captain Ray Lewis, the retired cop from Philly that got arrested at OWS was there listening to us.  I didn’t get a chance to talk to him personally but how fucking cool is that?

‘Junct: The Trashing of Higher Ed. in America
March 31st 10a-2p (South Jersey) Need the following for the photoshoot: 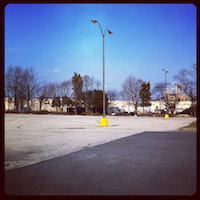 Non-Paying gig. In return will be food, copy and credit (thank you on ‘Junct’s IMDb page) Must have own transportation and expect to be there for the full four hours. Exact location TBD once the date draws closer. The final product will be in the form of DVD covers and movie posters to promote the documentary.

More info about ‘Junct can be found at the following links:
IMDb
2255Films
Homeless Adjunct
2255Films on Facebook (Inquirer here at this link if interested in being a part of the shoot)
Posted by 2255 Films at 9:12 PM No comments:

My partner in crime DLS recently returned from Chicago’s AWP and I’m eagerly awaiting the next batch of interview videos via Federal Distress. I’m hoping that it arrives by the weekend so I can begin to hack and slash it to bits in time for this year’s Left Forum.  While I don’t know the contents of the latest batch I’m assured by DLS they are phenomenal.  That’s all the reassurance I need.
We (Mostly DSL talking and me showing pretty pictures barring any technical difficulties) will be heading up a panel at the Left Forum on March 17th at high noon. The panel is called:
OCCUPY COLLEGES: Rescuing Higher Education from the Corporatized University.
Try to say that five times fast.  Details on the location, other speakers and the panel itself can be found at the link above as well as at the end of this blog. Tickets for the day I believe are $25 dollars.  If you are in the NYC area I suggest you go, if not for us, than the many other panels being conducted over the weekend.  Michael Moore has been recently confirmed by the Left Forum as their main speaker on Saturday night at 7:30.  Hope to see some familiar faces there.
The other big news (which technically I shouldn’t be blabbing about until it’s locked in) is that we *may* have a huge sponsor to help promote ‘Junct in the form of the mother of all road trips.  We are currently in negotiations with the sponsors trying to crunch numbers to make this crazy cross country trip a reality.  So please keep your fingers crossed and your couches available.  The preliminary route includes: DC, KY, TN, LA, TX, NM, CA, WA, IL, IN & OH.  Which I’ve dubbed the music & food porn run. It will take approximately two weeks to conduct.  The other two routes consist of a NE run and a Snowbird run, each clocking in around a week give or take a day, depending on how much I mash the pedal to the floor.  I plan to vlog each day of the trip (so expect bizarre stuff here).  I’ve already got a few volunteers for certain legs of the journey to help with the driving and to fend of boredom.
Road kill bingo anyone?
That said, I have a feeling DLS and I will be spearheading a crowd funding campaign to make these trips happen.
Sites mentioned:
2255Films
Homeless Adjunct
Left Forum
Hidden River Arts
AWP
Posted by 2255 Films at 8:37 PM No comments: