Left Maumee Bay around noonish today for Cleveland.  The two hour drive on 2 was pretty uneventful.  We passed by the Davis Besse nuclear plant again which we had been told by a local is one crack away from a complete meltdown.  That was comforting. Overall a boring drive. 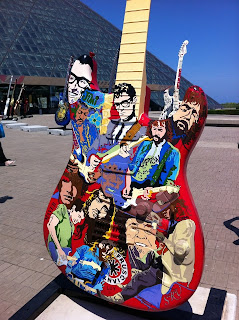 When we got into Cleveland proper I made a b-line for the rock and roll hall of fame.  It was pretty damn cool and it made me want to start shooting music videos.  I think my absolute favorite item in the HoF was a hate letter the Rolling Stones received during the beginning of their career.  The girl called them 'British Pigs' and to go home to England.  Honestly, I couldn't stop laughing while reading it.  The temporary exhibit was dedicated to The Dead.  Two top floors of the HoF was Jerry-fied.  I wish I had pictures of the place but they didn't allow any sort of media to be taken in the museum. 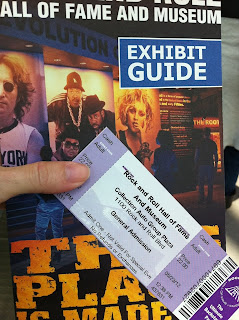 From the museum we grabbed a quick bite to eat before meeting up with our Cleveland liaison Leia (sp?).  She's a super cool chick that reminds me so much of my mom.  Even her home reminds me of my mom's place back in Jersey.  We've spent probably the better part of the night talking about just about everything under the sun as people filtered in and out of the house.  In fact I can still hear her and D in the other room chatting away while I type this blog.

I could probably stay up all night listening but I know we have more interviews lined up in the morning.  When we wrap up around 1 tomorrow we'll be packing up and heading to our last stop of the tour, State College PA.

To take a line from the dead:

What a long strange trip it's been.

UPDATE:  What I forgot to mention was our hostess took us out to a little downtown area in Cleveland Heights that was filled with bookstores, metaphysical shops, thrift stores and tea shops.  It was nice getting the five cent tour from a local.  Plus I picked up a copy of: Easy Riders, Raging Bull.